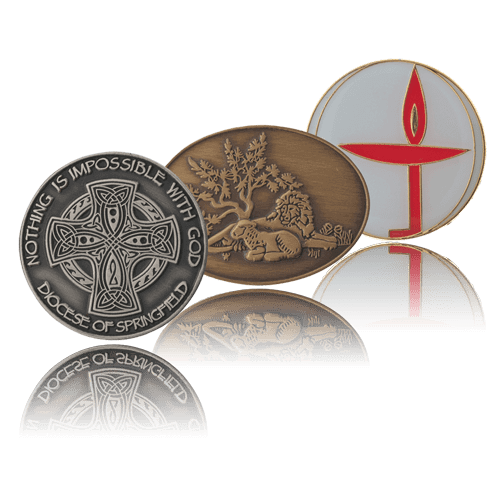 Custom medallions and saint pins are a beautiful way to honor Our Lady of Loreto!

Many, whether they are Catholic or not, have heard the term patron saint. Patron saints are chosen as special protectors or guardians of specific areas in life. These areas can include occupations, illnesses, churches, countries, seas, oceans and anything else that is important to human life.

History of Our Lady of Loreto: Patron Saint of Aviation

Patrons can be chosen by popes as well as groups and individuals and the naming is usually based on the saint's interests or talents. Our Lady of Loreto was officially named a patron saint of aviation by Pope Benedict XV on March 24, 1920, but had long been thought of as the patron saint of aviation by the late 1200s. Aviation included birds, angelic flight and then of course now in modern times all things having to do with air travel. Our Lady of Loreto protects and ensures the safe arrival for all those who travel through the air.

According to ancient tradition, the Holy House which belonged to Mary and Jesus, arrived by sky or sea, on the hill of Loreto at the end of the thirteenth century.  It reached Loreto, Italy after a brief stay at Tersato, Dalmatia, 1291, and landed 1294 at a location called Recanati (today's Loreto) in a wooded area belonging to a nobleman named Loreta.  The dimensions of the House of Loreto are identical to those of the House of the Holy Family that is missing from its enshrinement place at the Nazareth Basilica.  Bas-reliefs of the sixteenth century suggest transport of the Holy House by sea.  Although the story that the house was carried by air with the help of birds and angels circled around the land and became a powerful story, thus giving rise to the connection with aviation.

It's hard to say when the first Lady of Loreto medallions were made, but they have been given to pilots likely since the beginning of modern aviation. Whether Catholic or not, most pilots have welcomed the superstition of the protective medallion, wearing them when flying or hanging a medallion off of the controls in the cockpit. It can never hurt to have all bases covered.

Our Lady of Loreto can be worn as a medallion on the end of a chain, a saint pin or worn like a treasure. There have been military coins for air force units that carry the image of Our Lady of Loreto on them. It has become a popular gift to give when pilots graduate from school, and of course in the Air Force, it's hard to find a pilot without one. The imagery is usually the same, although there are a few different reliefs of Our Lady of Loreto, and typically have the words Protect My Flight? on them.