Never heard of these? Essentially, they are pin “bootlegs” made from original Disney molds that are somehow obtained after the company’s original production run ends. Other scrapper pins are made from completely different molds created by “knock off” producers.

Unfortunately, these cheap imitations frequently make their way into pin trading circulation. Scrapper pins are typically purchased first from eBay and other resale sites. In one common scenario, a family heading to Disney wants to trade pins, so the parents go on eBay and purchase a lot of 50 pins for $5, believing they are getting a real bargain. As they trade pins with cast members at the park, they may unknowingly put up to 50 scrapper pins into circulation -- until someone with a keen enough eye catches the fakes.

As we’ve blogged about before, the hobby of Disney pin trading is so popular and widespread among fans of Disney theme parks and movies that it even comes with its own code of conduct and rules for trading pins. But what about pin traders who break these rules? A problem many collectors encounter, especially those new to the pastime, is unwittingly coming across unauthorized trading pins -- aka “scrapper pins.”

How can you avoid falling prey to scrapper pins? Here’s what to be on the lookout for in these fakes and counterfeits:
-   Scrapper pins tend to have a low-quality look and feel, whether it’s faded or “off” colors (i.e., Mickey Mouse’s pants are purple instead of red), air bubbles in the cloisonné (colored enamel), a missing Disney back stamp, or a misspelling on the back stamp. One pin we saw misspelled Disney as "Disney"!

-   Pins that do not show a Disney character but still contain the ©Disney back stamp. For example, one observant pin trader caught a Precious Moments pin with ©Disney on the back, though Disney does not produce Precious Moments. It was quickly determined the pin was a fake.

-   When first released, a typical Disney trading pin costs upwards of $10-20. With the hobby as popular as it is, it is just unrealistic to think that anyone would be willing to part with their “personal collection” of 50 pins for $5. On eBay, if you look closely at this type of seller’s history, you will probably find they have numerous “personal collections” for sale at all times, and for rock-bottom prices. If it sounds too good to be true, when it comes to pin trading, it probably is.

-   Beware pins that are listed as brand new/never used, but do not come with the original pin backing or packaging Disney uses for special groupings of pins.

-   Some knock-offs contain Disney characters and images that have never been included on original Disney pins. This may be easier to pull off when it comes to pins that are just being released. For example, Disney will soon release a special set of pins commemorating its new movie, Great and Powerful Oz. If you aren’t familiar with what these news pins look like, it can be easy to think a knock-off -- also showing an image or character from this movie -- is the real thing. Browse the Disney pin trading site, to get a better sense of what authentic pins look like.

Where you trade your pins also matters. Online trading may make it difficult to accurately evaluate pins before accepting them. At Disney theme parks, trading with park characters wearing lanyards makes it possible to see the pin’s quality up close before making the trade.

Pin trading nights held throughout the year at various Disney properties are a good way for beginners to get their feet wet in the hobby and learn more about pins. What’s nice about these events is that having well-respected collectors present raises the level of trading, without the worry about knockoffs.

There are two types of pinheads. 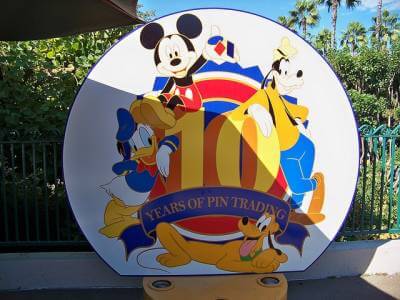 Lapel pins may date back to the 13th century, but modern pins aren't your grandfathers. As a matter of fact, pins have become quite the staple in the contemporary wardrobe. Popular for their many styles, lapel pins might even be one of the most customizable accessories to ever exist. In fact, with as many activities and interests as are around today, it's no surprise that pin designs are seemingly never-ending. Of course, the secret to this is in your own imagination. Designing a pin for militia use or children's choir uniform is all a matter of dye, metal and most importantly, ideas. As time has gone by, however, the uses for lapel pins have become increasingly diverse. And what has come from all of these custom pins? A huge gold-mine for custom pin collectors.

"Most of all, however, custom designed pins have made a functional impact; both in war and in culture."

While you may wear a lapel on your jacket or shirt, collectors are wearing them on their walls. The reason being is not only their era-themed looks but also their historical significance. In fact, lapel pins are one of those decorative items that can't really be called an accessory. At least, not for certain. Although you may view lapel pins as nice pieces of decorative metal, they have stood for many things; both offensive and motivational. Most of all, however, they have made a functional impact; both in war and in culture. A case study, for example, is the Soviet Union.

From 1922-1991, the Union of Socialist Republics used pins for all sorts of things. USSR Custom pins were used as souvenirs, in sports events and even to represent their culture. Handing out these pins raised awareness for their ideas, and stood as motivation for their actions. Custom pins made an important impact on their numbers both supporter-wise and financially. To this day, many lapel pins are sold on the same concept. However, modern custom pins are sold on, perhaps, a less offensive premise.

From Disney to the USSR, everyone loves custom Disney pins.

Another favorite of many pin collectors is cartoon character pins. It seems like yesterday that Walt Disney first began creating cartoons, however, reflecting on his first cartoons in 1923, Disney is nearly 100 years old. This means that many of the custom pins designed with classic Disney cartoon characters are soon-to-be antiques, and we all know how collectors flock over antiques. In fact, Disney pin trading has become quite popular in recent years. This trading event is amazing because it allows collectors to share exclusive and limited edition custom pins. Disney pin trading typically takes place in Disneyland mid-August. Betty Boop, who is celebrating her 84th anniversary this year is also a popular collector's pin as well as The Hard Rock Cafe pins (1971).

It's weird to think that some of the lapel pins made today will be collector's items in the future. Military pins, nonprofit pins, and even current McDonald's name-tag pins will all be antiques in 100 years. However, old tactics die hard, and I believe that lapel pins will never go out of style. They will simply evolve as they have in the past from their retro relatives boutonnière's (which were exclusively flowers.) Some historians even claim that boutonnière date back to the Aztecs. It's really funny to imagine that even your custom pins could be the ones that collectors are trading in 2116. But for now, whether it's for the significance of your sales or your interests, how about checking out how you could benefit from custom pins? All you need is an idea, a goal and to be ready for some sweet success.