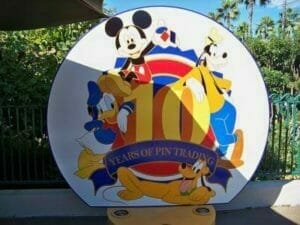 Since the opening of the first Disneyland park, lapel pins have been created and sold to promote the Disney culture.  A key component of their massive array of products has been lapel pins symbolizing their vast cast of characters, rides, and park sections.  It is interesting to note, however, that the tradition of collecting and trading these pins didn’t start until 1999 with the Millennium Celebration.

It was during this year-long celebration event that pin trading was introduced at the Disneyland Resort. The trend took off and by the following year, the Walt Disney World Resort held an event specifically constructed for the purpose of pin trading.  The hobby of collecting and trading pins has spread to all of the Disney parks and resorts the world over.  Each location creates its own pins and limited editions.

Disney workers or ‘cast members’ have a lengthy set of rules that dictate what pins they can have on their uniforms and which they cannot.  Typically lapel pins are worn on long lanyards that color match the particular park at which they work.  To trade a pin with a Disney cast member, the pin must be made of metal and have a representation of a Disney character, park, attraction, icon, or other official affiliation. Additionally, the pin must have a Disney copyright on its back.  There are also rules about how often they can trade in a day and with whom.  Each park also has further proprietary rules about such specifications.

Disney pin etiquette dictates that a tradable pin is one that is “a cloisonné, semi-cloisonné or hard-enamel metal Disney pin,” trades are on a one-for-one basis, and “certain pin sets must be traded as sets.” Further interesting pin etiquette states that no money can change hands on Disney property in exchange for a trading pin. In order to trade a pin with a Disney cast member, the pin must be made of metal and have a representation of a Disney character, park, attraction, icon, or other official affiliation. Additionally, the pin must have a Disney copyright on its back.

Collectors and traders find that outside of trading in a Disney park or resort they also have a growing community of online and in-person meeting forums in which to meet others and trade their pins.  Due to the growing trend of trading Disney pins, they can also be purchased online through both Disney sites, and auction site as well as personal vendors that are selling parts of their collection. Some collectors trade for the value of pins, while others trade to complete sets.

Disney allows lapel pin companies to create lapel pins for them and for collections.  Each company must go through a rigorous inspection to assure that the quality of their product meets Disney standards. The Monterey Company is proud to be one such company and has made lapel pins over the years for Disney.